Branks, whirligigs, and riding the stang

Branks, Whirligigs, and Riding the Stang – 17th century crimes and their punishments.

Crime and punishment has been a part of civilised society since the beginning of the human race.  Much time is spent and wasted arguing for and against such things. Folk are sometimes incensed by the seemingly lenient punishment for the most heinous of crimes. Human rights come into play nowadays, where even the extreme terrorists are offered protection, asylum, and are treated with respect.

From Hatfield’s Historical Notices of Doncaster we read about some of the more obscure ways to rehabilitate offenders. They are not sent on a course to teach them the errors of their ways, nor are they slapped on the wrist and asked to behave.

To set the scene, Hatfield describes the town of Doncaster this way:

“….we refer to the period when the old swing signs which the least winds shook, making them creak and groan upon their rusty hinges, one against the other; and what with these discordant noises, the whistling and moaning of the wind, that went booming with a hollow and unearthly sound under and over the vaulted street, mingled with the rush of waters on a rainy day,……. it is wonderful how anyone could get a wink of sleep in houses, with high-peaked, loosely-tiled gables, the upper storeys projecting half a room’s width beyond the lower storey, so that the basement might not encroach more than possible on the narrow roadway.”

The punishments that Hatfield talks about were even ludicrous by his 19th century standards. He describes other forms as barbarously cruel.

“Drunkards were paraded through the streets wearing a ‘tub’, instead of a cloak,

a hole being cut out of the bottom for the head to pass through, and two small holes in the sides, through which the hands were drawn. This was called the ‘Drunkards Cloak’. Scolds had their head enclosed in a sugar-loaf shaped cap, made of iron hooping with a cross at the top, and a flat piece of iron projecting inwards, that was laid upon the tongue; a string was attached behind, and by that the scold was lead through the streets.” This barbaric device was called a brank, or in some parts of the country, a gossips bridle.

“Minor offences were sometimes punished by using the ‘Whirligig’, a round wooden cage, turning on a pivot; the culprit enclosed and whirled round with such velocity that extreme sickness ensued – and it proved in reality a punishment highly distressing and dangerous, and therefore shamefully unfit for the correction of slight crimes.”

Something that some of you might be a little more familiar with is the “Cucking-stool, or Coke-stool, an engine for the punishment of scolds and unquiet women, by ducking them into water. It is mentioned in the disbursements by Robert Palmer, William Ellison, and William Holmes, Chamberlains for 1632:

‘April 4, paid Mr. Webster for 8 stone and 1lb of iron for the Cuckstoole, xiis xid’

The Choking stool is a corruption of the words Cuckstoole and Coke-stoole, and is thought to have evolved from the fact that the culprit is practically choked with water. Another derivative is the Ducking stool. According to domesday records the device is referred to as a Gazing Stole or Cathedra stole.

pond. It consisted of a long pole hanging over the pond, generally of dirty water, where the offender, who was strapped fast in the chair, was dipped three times by parties getting hold of the other and longer end; the pole swinging on a pivot on piles driven into the ground near the pond. It was also brought into requisition at Friars Bridge. The punishment was conducted along the approach to the Cheswold, from the west side of French gate. Here the instrument hung on a pulley fastened to a beam about the middle of the bridge; and the female having been fixed in it, she was let under water three times successively, and then taken out. The bridge was then made out of timber. On the back panel of the ducking stool was, it is said, an engraving of the devil taking hold of scolds. Happily for the offenders, one of the Town Clerks burnt the ‘legal conviction’ papers in a baker’s oven.”

Another punishment that the criminals of Doncaster could expect was the ‘Pillory’. To save a long explanation of what the device did, I will simply tell you that the other name for a pillory was a ‘stretch-neck’, I think you should get the picture from that term. The pillory was traditionally a post erected at a crossroads by the Lord and had his arms displayed upon it. Doncaster’s pillory stood at the junctions of three roads, High Street, Baxter Gate, and French Gate (or clock corner as we know it today).

“The pillory frame used to be kept in the town Gaol. It was formed of wood, consisting of two uprights 2½ inches wide and 3½ inches thick, fixed at a distance of 3 feet 6 inches from each other, in a plank, which can be fastened to the ground. On this plank the culprit stood, and toward the upper part was a cross-bar, upon which rested a board 9½ inches in length, set edgeways, the upper side of which was 4 feet 9 inches from the base, on which the culprit stood. In the centre of this cross-plank was cut the half of a circle of 6 inches in diameter; and, at a distance on each side, the halves of two smaller circles. Another board 8½ inches wide slid down a groove, having corresponding semi circles cut out of its lower side. There was a centre hole to receive the neck, with a hole on each side for the hands; and from a piece of wood being fastened in the centre of the basement plank, the legs were either fastened down, or some other arrangements were made for pillorying men of less than ordinary stature. The structure was finished by a board nailed across the upper part above the slide, and cut out at [the] top with a projecting centre curve.”

Eventually, on February 3rd, 1725, the post was removed as it was “being a great hindrance to coaches and carriages turning down into the Market Place”

The stocks were coming into fashion at this point and every town, village, and hamlet had them. The last stocks in Doncaster were situated at the Parish Church-yard, placed behind the pump, in St. George Gate. They were founded on the same principle as the drunkards cloak and the brank – that of humiliating exposure. The stocks were often constructed so as to double-up as a whipping post. The post which supported the stocks being made “ sufficiently high, and furnished near the top with iron clasps to fasten round the wrists of the offender, and hold him securely during the infliction of his punishment.”

Of course, for the more severe crimes, Doncaster had its gallows. They were temporarily taken down during the mayoralty of Thomas Coulson, 1614-15. The removal was, “only temporary, for in the Chamberlain’s (William Wade, Francis Thwaites, and Edward Kirke) accounts of 1648 is the following item:

Whipping wasn’t always carried out at a designated whipping post for, on the 23rd May, 1789, Mary Ashforth was tried at the Borough Sessions and found guilty of stealing two pieces of muslin, the property of Mr. Benjamin Earnshaw. She was sentenced to be publicly whipped through the market on the following Saturday. She was corded to the tail of a cart, drawn by a horse, and from the Gaol, along St. Sepulchre Gate, Baxter Gate, Market Place, Scot Lane, and High Street before being returned to the prison, having “received from the hands of the under-gaoler, a severe castigation. Salt and Brandy were applied to the lacerated back and shoulders. A crowd of boys and women attended the culprit in her progress through the streets. The public beheld this without pity or commiseration.” Through various acts of parliament, the barbaric scene of whipping in our streets was finally outlawed in 1827.

To bring this article to an I must finish with Riding the Stang:

A common crime back then was that of men beating their wives unnecessarily. The favoured punishment for this was called ‘Riding the Stang’, whereby the offender was “mounted a-straddle upon a beam or pole” before being paraded through the streets. Two persons supported the beam upon their shoulders while a third had the job of proclaiming the guilt of the offender. “Fisher Gate, Marsh Gate, and St. Sepulchre Gate without the bar were notorious for these indecencies of domestic life. “ 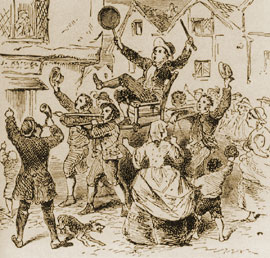 the 1830s. “The procession emerged from the Volunteer yard. Men, women, and children were there with all kinds of articles, cows’ horns, frying pans, warming pans, and tea kettles drummed on with a large key; iron pot lids used as cymbals; fire shovels and tongs rattled together; tin and wooden pails drummed on with iron pokers or marrow bones; in fact, every implement with which a loud, discordant sound could be produced. The herald was seated on a chair fastened on two poles. He seemed elated with the honour. He carried a large frying pan and hammer, and after beating them very vigorously, made his proclamation in rhyme using the following words:

One response to “Branks, whirligigs, and riding the stang”